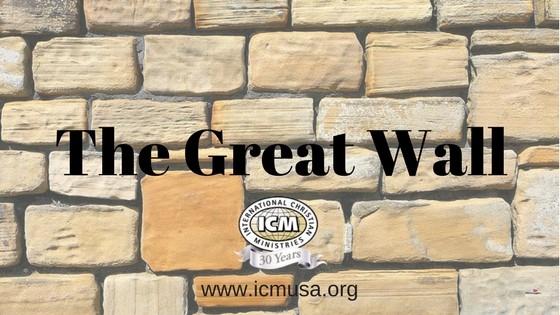 “We want the Church to be small not only that fewer men may know the Enemy but also that those who do may acquire the uneasy intensity and the defensive self-righteousness of a secret society or a clique.”  C.S. Lewis The Screwtape Letters

Satan’s first attempt at wall building was designed to keep people from a relationship with God.  By introducing deceit and sin into the world, he was able to break the natural relationship and bond God intended between Him and us.  God’s love for us has broken down that wall and has made it possible to reestablish the relationship (Eph. 2:14).  However, Satan was at it again, building a different wall to keep the message away from those who need to hear it.

The new wall is a stealth wall.  It is not easily picked up on our spiritual radar.  God’s plan is to unleash His people (the Church) to share the message of the Kingdom. The message is simple; God has already torn down the wall separating us and making reconciliation with Him a reality.  From Matthew 28:19,20 and Acts 1:8 we know that, as God’s people, our calling is to make disciples throughout the world, letting them in on the Good News that the wall is destroyed.

However, Satan came up with a master strategy to wall people off from those who need to hear the Good News.  For centuries Satan as been at work building a mental wall that leads us to believe the wrong things and thus not do the right thing.  The key was to change the meaning of “church” from the people of God, to the place God’s people go.  By changing the meaning, people now “go” to church.  Evangelism and discipleship are now “programs of the church,” and the church is what we “do” on Sunday.  Monday through Saturday is for living in the secular world where we are walled off from Sunday church.

This is not new.  It has been one of Satan’s key strategies from the beginning of the Church.  Jerusalem was safe and comfortable for the new, rapidly growing Church.  Rather than return to their home countries after Pentecost, believers moved to establish Jerusalem as the home of the new faith.  That all changed when persecution of the Church broke out in Acts 8.  If Christians would not break the wall that kept them from going to the nations (Acts 1:8), then God would allow the persecution that accomplished the same end.

It is time that we rediscovered that the Church is you and I.  It is our calling to make disciples where we live and around the world.  As long as church is a place to go we will fail to go as the Church into all the world.

Acts 8:4 (NLT)
4  But the believers who were scattered preached the Good News about Jesus wherever they went.

2 Corinthians 10:4-5 (NLT)
4  We use God’s mighty weapons, not worldly weapons, to knock down the strongholds of human reasoning and to destroy false arguments. 5  We destroy every proud obstacle that keeps people from knowing God. We capture their rebellious thoughts and teach them to obey Christ.


“Surely you know that if a man can't be cured of churchgoing, the next best thing is to send him all over the neighbourhood looking for the church that "suits" him until he becomes a taster or connoisseur of churches.”
― C.S. Lewis, The Screwtape Letters
Posted by Unknown at 9:42 AM 2 comments: