The Road Not Taken


This is the title of a famous poem by Robert Frost. It also represents a concern I have about the future of the Church in Africa. When ICM began 30 years ago in Kenya the focus was on discipleship. The goal was to come alongside Christians leaders and teach them how to be effective disciplers in and through their churches. Over time this discipleship emphasis found expression in two delivery models.

The first model, Africa Theological Seminary, began as a pioneer program in Africa. It came into existence in order to deliver quality, in-service, training for ministry leaders at various educational levels. The second model, the Christian Leadership Institute, was created out of a desire to provide quality seminars and conferences to further enhance a leader’s ability to disciple others.

But something is missing.


As I travel the continent teaching, sharing and watching, I have come to the conclusion that far too many churches in Africa (and beyond) are taking a dead end approach to church development that hinders their impact for the Kingdom of God.

Jesus came at just the right time to offer the world a way back to God. His message of reconciliation was preached through signs and wonders as well as words and deeds. The ultimate deed was his death on the cross for our sins.

Recreconciliation with God was made possible by his death and resurrection. His message of reconciliations to the whole world was made possible by his life. Fulfilling the prophecies of the Old Testament, Jesus paved the way for a "nation of priests" commissioned to go into the whole world and make disciples of every people. This nation is more commonly known as the Church, the called out ones. But the Church has been called out in order to go into all the world. The Church is a nation of ambassadors commissioned with the message of reconciliation. As the Church, they gather in their various communities to worship, partake of the sacraments, and be equipped as effective disciples that come in to grow, so they can go out ambassadors to the world.

But the emphasis was not on the local gathering but on the effective witness of every believer in their sphere of influence. It would appear that this model of coming in order to go is not emphasized enough. The road most traveled appears to be one that places the greatest emphasis on the gathering of believers.

When there is a shift to church as building there is a danger that it will become more akin to a social club than to a center for equipping people for the work of the ministry. Consider the following examples: 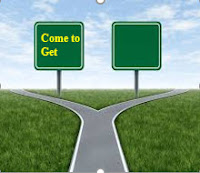 · In a recent interview with a growing church in Africa, the leaders proudly revealed they had 40 programs in which members could participate on a weekly basis. This does not mean these programs are wrong or bad. But every person only has so much time. Where is the "going" into the community?
· In West Africa, I turned on the TV and watched a few minutes of casting out of demons and flailing of bodies and limbs as people were healed of everything from lust to demon possession...miracles are good, but we should do them where Jesus did them: in the marketplace.
· Riding around any major city in Africa you will see signs for “miracle services/crusades” on nearly every street corner. The call is, "come to get" something God has for you. These events are not wrong, but very incomplete. God's call is to take his message and healing power into every corner of the marketplace.

I want to be clear: I do not oppose the miraculous. But we need to travel carefully along the road to ensure miracles do not replace transformation. Instead of transformation that comes from intentional discipleship, it would appear that some pastors believe that a show of God’s miracle power is the key to unlocking church growth.

There are two consequences of this “Come and Get a Blessing” model: the laity views itself as ‘consumers,’ and pastors begin to view themselves as prophet/priests. The result is the local church becomes an entertainment hub, where the focal point of ministry is "priests and prophets" who are the intermediaries who deliver God's miracle to the congregation.

The "Come to Go" church is committed to serving the congregation by equipping them to live for Jesus seven days a week. While the “Come and Get a Blessing” model is very prevalent, we can be

encouraged that there are pastors and local churches who have not succumbed to the temptation to travel the road of a church as entertainment.


These churches still offer programs, but they are geared toward equipping members to live for Jesus in all aspects of their lives – their marriages, families and work. In these churches, pastors see themselves as servant-leaders, committed to equipping their members to “go” into the community and be God’s blessing, light and leaven. ICM’s Africa Theological Seminary has been instrumental in equipping hundreds of these leaders. But there is a need for greater emphasis on discipling every member of every congregation to be a blessing.

Through DML, pastors gain a better understanding of how effectively disciple business people in their churches. It also helps business people understand the call as ministers to their communities by running their businesses as unto the Lord. The results are pastors commissioning business people to be ministers through their daily interaction within their communities. As a result, churches grow, giving increases, and members become more committed. Also, businesses who go through the program increase their personal income by over 100% and their business sales by more than 80%!

ICM has now begun the process of rolling out DML in Kenya, Ethiopia, Egypt, Ghana, and Nigeria. We are looking at 2017 as a breakout year where we reach a tipping point in the movement. We need your help! We are looking for business people and pastors who want to team up with us to make the DML movement possible in many more countries. We are also in need of help in meeting the financial challenges of taking this message to the nations.

Want to learn more about DML? Send us an email at: dmlinfo@icmusa.org


Want to partner with us to see this rolled out across Africa and beyond? Donate Here. Scroll down the fund list to: Discipling Market Place Leaders (DML) - 609045

I shall be telling this with a sigh
Somewhere ages and ages hence:
Two roads diverged in a wood, and I—
I took the one less traveled by,
And that has made all the difference. (http://www.bartleby.com/119/1.html)

It is time to take the road less traveled, it is the one Jesus took, and we are to follow.

Discipleship is always guided by purpose.  Christian discipleship is committed to helping people grow in the grace and knowledge of Jesus (2 Peter 3:18).  It is the process of becoming more like Jesus (Rom. 8:28,29).  What is often overlooked is that Jesus was guided by purpose.  To become like Jesus is not simply a character issue, but a life purpose issue.  Jesus was living out commitments that had begun with creation.

He was committed to:

The Great Vision: The Call to Purpose
1  The LORD had said to Abram, “Leave your native country, your relatives, and your father’s family, and go to the land that I will show you. 2  I will make you into a great nation. I will bless you and make you famous, and you will be a blessing to others. Genesis 12:1-2 (NLT)

The Great Commission: The Call to Discipleship
19  Therefore, go and make disciples of all the nations, baptizing them in the name of the Father and the Son and the Holy Spirit. 20  Teach these new disciples to obey all the commands I have given you. And be sure of this: I am with you always, even to the end of the age.” Matthew 28:19-20 (NLT

The Great Commandment: The Call to Relationship
36  “Teacher, which is the most important commandment in the law of Moses?” 37  Jesus replied, “‘You must love the LORD your God with all your heart, all your soul, and all your mind.’ 38  This is the first and greatest commandment. 39  A second is equally important: ‘Love your neighbor as yourself.’ 40
Posted by Unknown at 3:31 PM 5 comments: